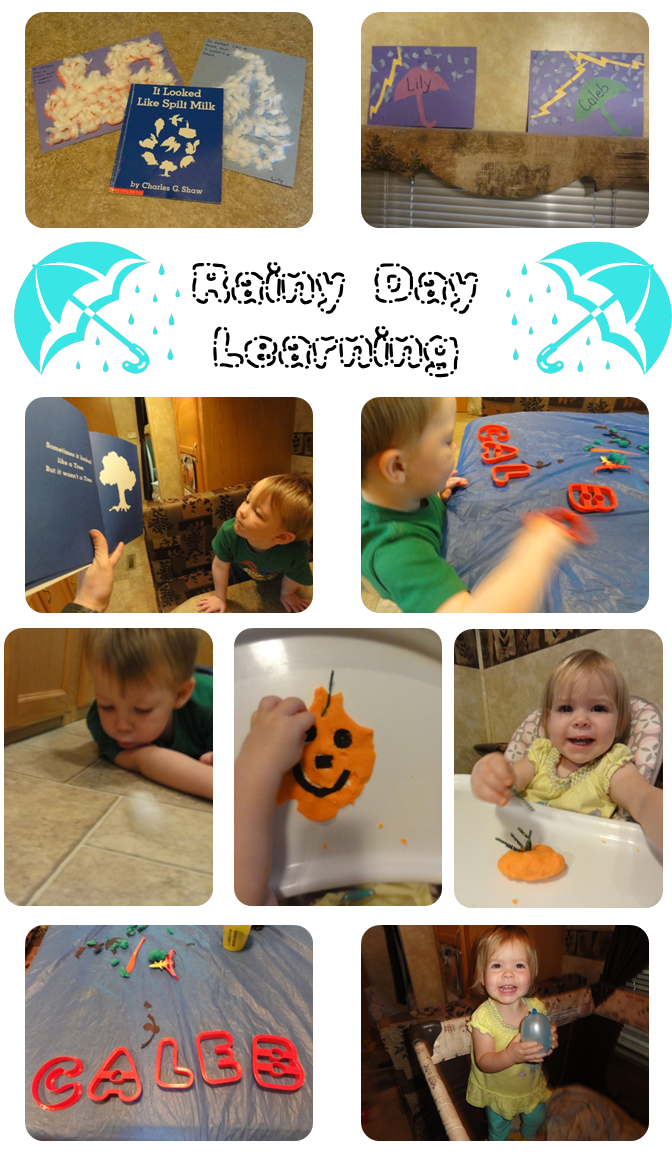 We’re on the road… work related. The Chicken Whisperer is speaking at the Sunbelt Ag Expo inMoultrie, GA. It’s the largest Farm show in the nation! We’ve been looking forward to attending this show for a couple of months because Caleb LOVES tractors… our whole family LOVES tractors! They have an antique tractor parade scheduled EVERY DAY!

Today is the first day of the event. We arrived yesterday with our RV and were guided to park in a grassy field where we have water and electric hook-ups, but no sewer (Ugh!). The storms were set to arrive early this morning and… they did. Rain… Rain… More Rain… Thunder & Lightening… and More Rain…

The grassy field is now a soggy mess. Andy had to walk through the rain and soggy, muddy ground toting his materials all dressed in his Chicken Whisperer garb to have 2 out of 3 of his presentation canceled due to bad weather heading our way. They say, “The third times a charm…” and it was with about 45 in attendance. With this nasty weather… that equals about 450!

Caleb, Lily Anne, and I tried to make the best out of our day stuck inside the camper. Let me just paint a picture for you… A 3 year old and a 1 year old inside a 24' travel trailer with no slides. Let me make that a little clearer… When you take away beds, bathroom, closet, and kitchen, you are left with floor space. How much floor space? Without drawing a specified diagram, just picture a 3' x 12' area. Normally, I don’t take down Lily Anne’s pack & play bed which is over the dining table, but today I did. We needed a table. We needed more room. We STILL needed MORE, but we made do and we’re all still here!

I knew the most important thing to do to keep them ME from going crazy, was to keep them busy… very busy! Below is a list of the rainy day fun we had.

The first activity was inspired completely by my 3 year old. As Daddy was leaving he said, “Let’s make rain.” I have no idea what he actually meant by that, but to me it meant: CRAFT! I pulled out some light blue construction paper and tore off a skinny strip for each kid. Their job was to tear it into as many small pieces as they could. I cut out the umbrella and then Caleb said we needed lightning and thunder too. I told him I could make lightning, but thunder was just a sound we would have to make. I helped them put glue on their umbrella and lightning bolts and let them place them on their paper. Then, together we made glue dots all around. They placed a “rain drop” on each dot. I added their names and hung them up. I love decorating the RV with their art work! 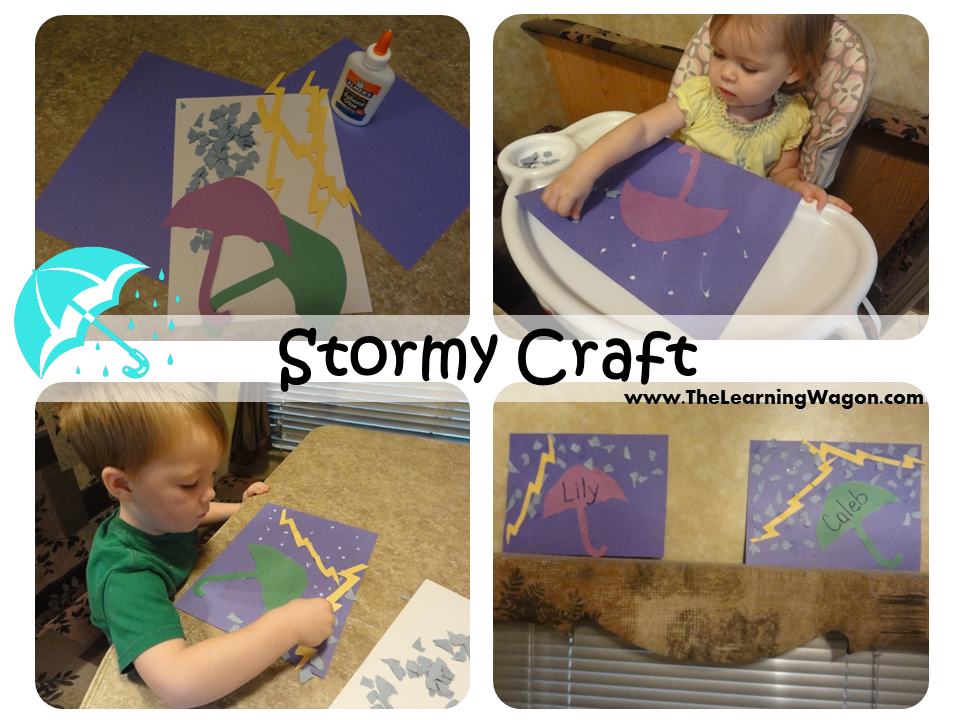 Caleb saw me use a marker to write their names on their papers and asked if he could color with markers. I said, “Of course!” Letting them draw there stormy scenes while I cleaned up was perfect! It was a great time for Caleb to work on his vocabulary terms as he talked about the lightning flashing and the thunder rumbling, but it also helps him to work through his fears of storms. 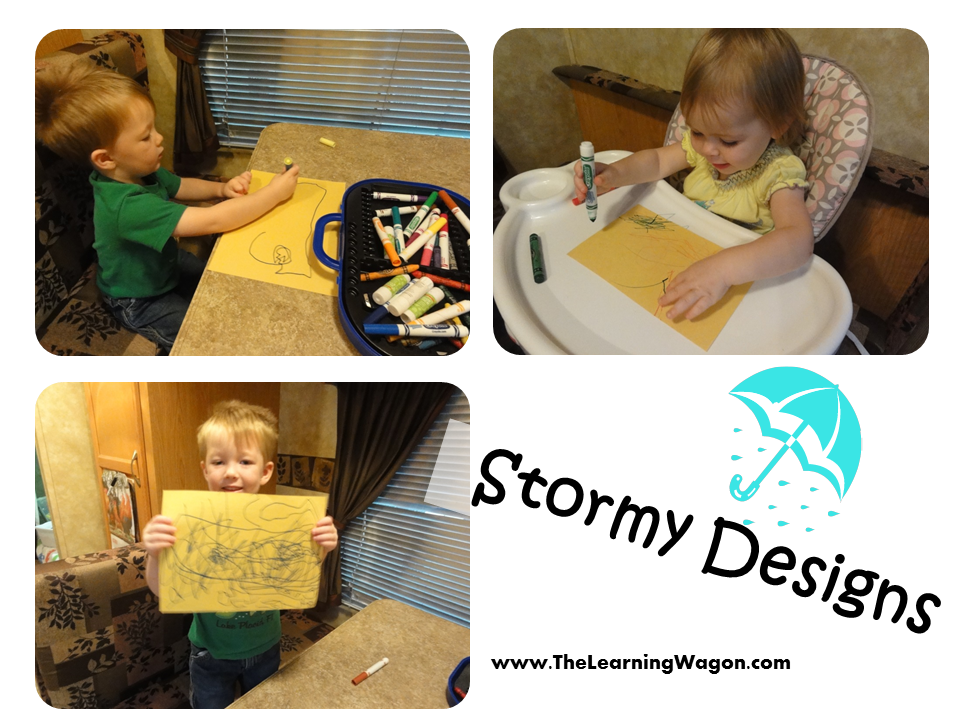 For the next activity, I read the book, It Looked Like Spilt Milk, by Charles G. Shaw. Caleb LOVED it! He thought it was so funny! I had this activity planned in advance, because we had been checking the radar and knew what to expect with the weather. I packed some di-cut vehicle shapes and let the kids pick out the one they wanted to turn into a cloud. I learned 2 things doing this activity.

#1 – The di-cuts should have been smaller. Lily lost interest early on and just played with the cotton balls. (Hey, a little sensory fun for her is fine!) Caleb was only interested if I was doing it with him. Also, since they were so big, there wasn’t much space to write the phrase coined from the book, “It looked like a ____, but it wasn’t a _______.”

#2 – Lily’s boat was light blue so it blended better with the paper versus Caleb’s bright red train that you can still see through the cotton balls. 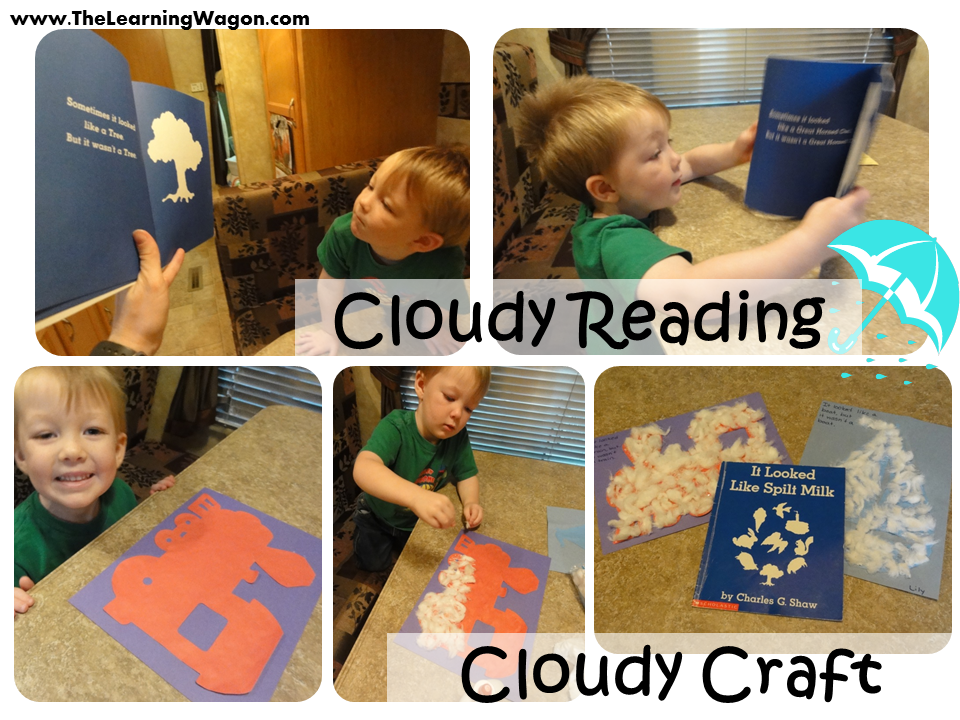 From there, Caleb enjoyed blowing a cotton ball back and forth on the floor. This would have also made a fun game. We could have created goals and scored points by blowing the cotton balls to them, but we didn’t get that creative at the time. 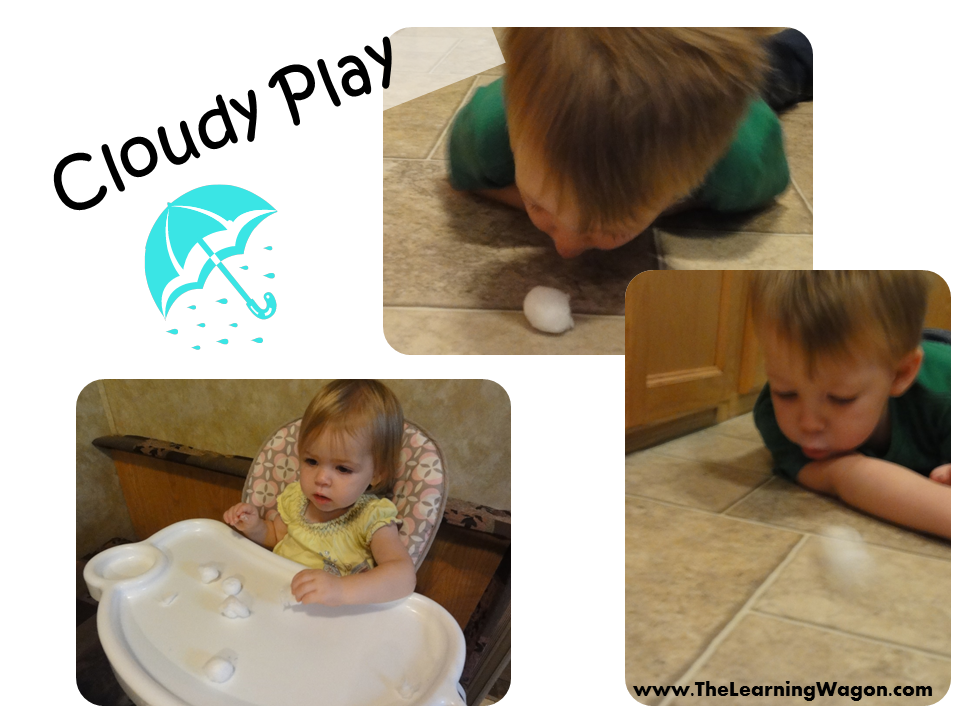 For the next set of activities, I read one of my favorite Halloween books, The Bumpy Little Pumpkin, by Margery Cuyler. I gave the kids orange play dough to create pumpkins with while I cut out shapes of black construction paper to design faces. For Lily, I flattened her dough and made the face. Then, I took a piece of pipe cleaner that we used as the pumpkin stem to cut out the shapes creating a puzzle effect. I then encouraged her to put the shapes in the holes. Caleb, used a variety of shapes making different kinds of faces and then changing them again and again. When Lily was done with her puzzle, I rolled the dough into a ball and she put the stem in the top and pulled it out several times. I saw an opportunity of interest and took it! I cut several more pipe cleaners and gave them to her. She enjoyed sticking them all in the top and taking them out and repeating several times. When he was finished, Caleb pulled out the letter cookie cutters for his name. We talked about what letters were in his name, which letter when first, next, and so on. I mixed all the letters up and he had fun finding the letters and putting them in order to spell his name! I'm so proud of his motivation to learn! 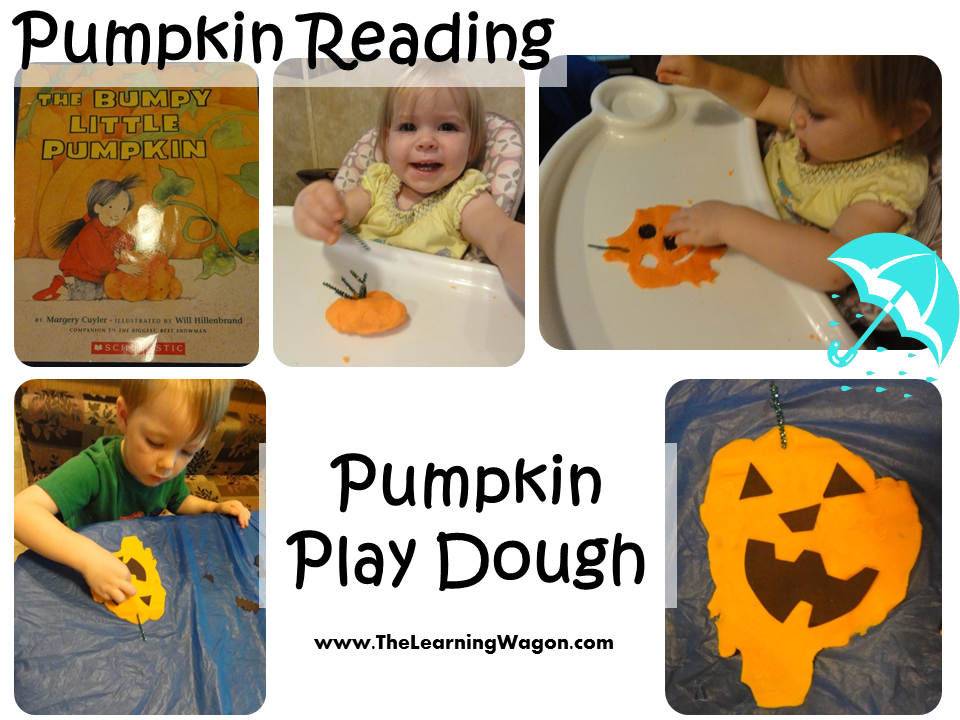 After nap, the natives were getting restless. I knew I needed to get them moving, but without breaking things. I saw in my bag of goodies, I had some balloons of various sizes. I decided to go with the smallest, what would normally be used as water balloons. I blew up a few of them and gave them to the kids. Normally, I don’t let Caleb throw things in the camper because he’s 3 so his aim is non-existent even if he tries to aim, which is not usually. He just likes to throw things up in the air and HARD! In the camper, things have come down into the sink full of water and even the stove while cooking! These balloons were perfect though… no matter how hard he threw it, they barely went anywhere! We will definitely do this more often. Lily Anne popped a few, but she got the hang of it and held on to the last one for the rest of the day. 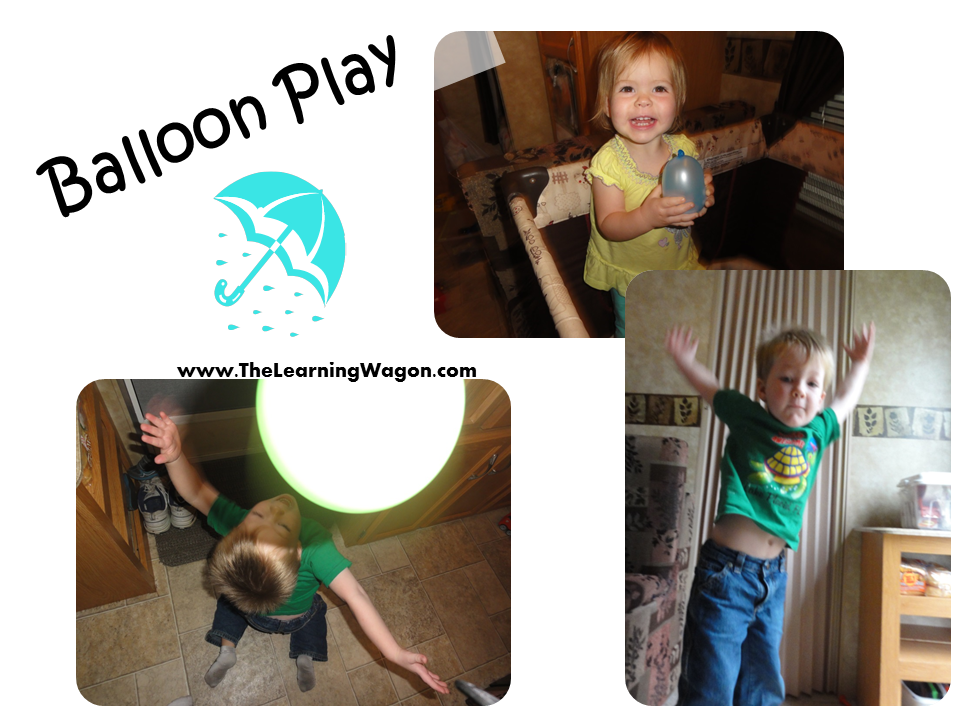 Around this time, Daddy got back from his last presentation and since it wasn’t raining anymore, we decided to brave the soggy, muddy, slosh outside our camper and enjoy some much needed fresh air. The kids wanted to take their balloons, so I twisted some pipe cleaner around the knot of the balloon and let them carry them around the Expo. We saw gobs of tractors, climbed on a few, saw mammoth silos, and grabbed a homemade treat. The kids still had their balloons when we got back, so after dinner, we tossed them to each other for a while. Right before bed time, I had the kids put the balloons on a stool and sit on them to pop them. They thought this was hilarious and wanted to do it again and again. I will definitely remember this in the future! 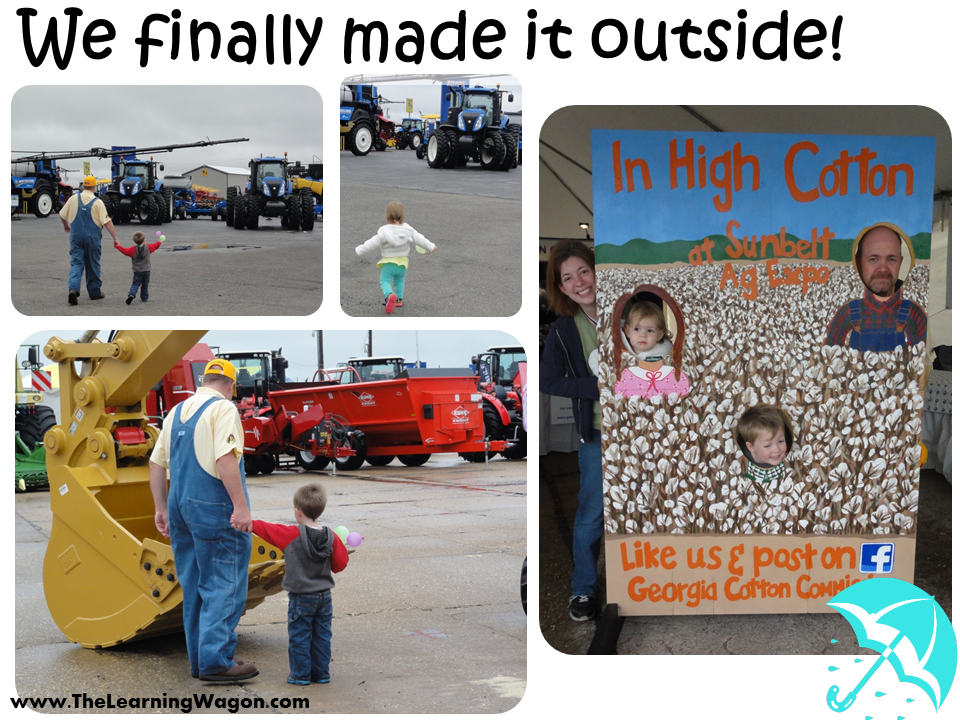 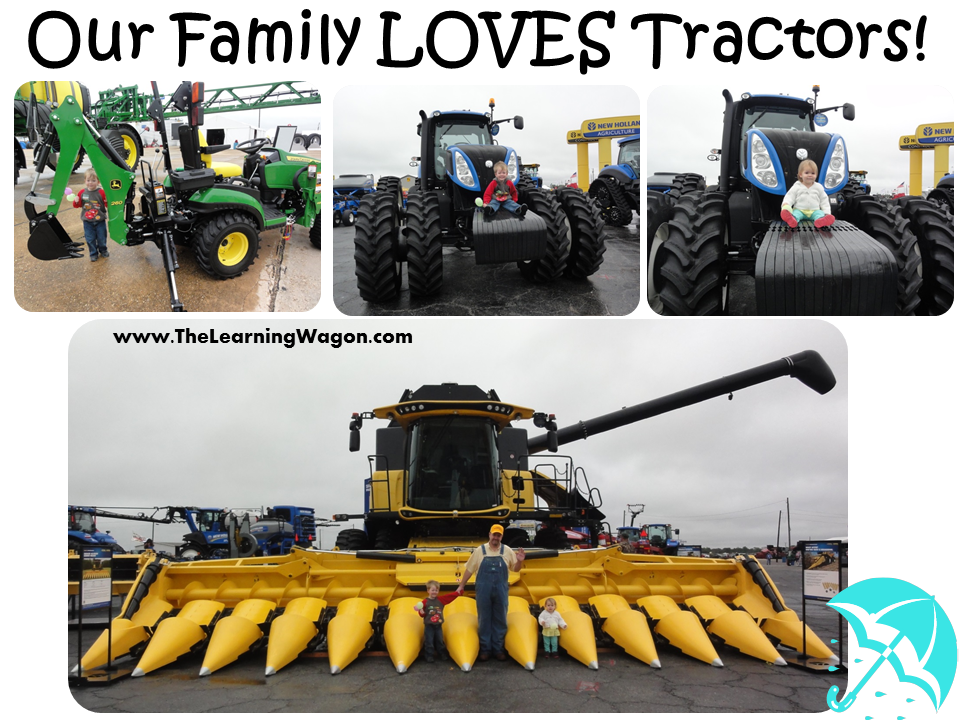 Tomorrow is supposed to be nice! We’re looking forward to being outside… A LOT!

What are some of your fun rainy day activities you've enjoyed while confined to a small area? Please share them in the comments! I’d love to hear from you! 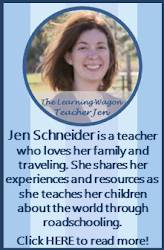 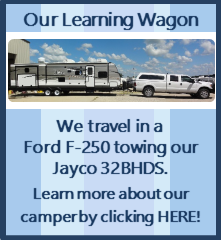